Ray Martinez is dedicated to the Fort Collins, Colorado community in which he grew up and has over 30 years experience in public service. He served three years in the United States Army in Thailand and stateside duty — also earning the Army Commendation Medal. Ray began his career in the Fort Collins’ Police department in 1974. During his tenure, he worked closely with Hispanic community leaders, youth and athletes to improve the relationships between the community and the Police. He also became an expert witness in the field of identification, recognition, and investigation of dangerous drugs.

Mr. Martinez was the lead investigator in an international terrorist investigation involving the attempted assassination of a Libyan student. The magnitude of this criminal episode is the subject of two published books: “Death Merchant” by Joseph Goulden and “Man Hunt” by Peter Maas. Historically, Mr. Martinez was the first Hispanic Sergeant in Fort Collins police service (appointed 1982 by Police Chief Ralph Smith) and retired from Police service in 1996 after twenty-five years of law enforcement service. Fort Collins Police Department from 1974 on… A collection of photos captured by Ray As your council member, I won't think that I am bigger or more impotant than the process.

I believe there has to be a balance between our economy, environment, and quality of life.” 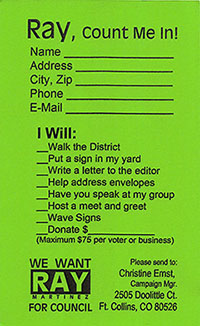